Introduction (or, how many patterns are there?)

While spending thousands of hours over many years trying to make this as fine a book as possible I have tried to imagine what you the reader would like to find within its pages. At times, imagining a reader to whom anything smacking of technical notation is an anathema, I set about to diagram the patterns in as visual a fashion as possible, as strip cartoons, showing picture by picture the movement of the balls in the air. At other times, envisaging a reader to whom juggling notation is a fascination, I began devising the series of novel methods of generating juggling patterns included within these pages, methods which apply not just for four balls but for any number. The result hopefully is a book that will give pleasure to every class of juggler.

New patterns are introduced more or less in order of difficulty, but, until greater skills develop, the beginner may like to pass over the later patterns in each section and move on to the simpler patterns that invariably begin the next section.

It is sometimes thought that there are an infinite number of juggling patterns. Realistically this is not so, for there are practical limits: none of us can handle a hundred balls, nor can we throw them as high as the moon. How many patterns are there? If we mean with four balls, and count only ‘asynchronous’ patterns going no higher than ‘height seven’ […], and do not count combinations of patterns, but allow patterns of any length, then we find that there are 29,693.

Many of these 29,693 patterns are of little interest: merely to list them in triple column would give a book larger than the present one. One of the purposes of Four Ball Juggling is to extract from this mass of material the more interesting patterns, and to group them in as handy a way as possible; in addition a large number of intriguing combinations have been included, many of them not at all obvious but delightful for all that. The reader is wished as much fun with the material in this book as the author has had in preparing it for his unknown reader.

The "Big Toss-Up" Finale at the Four Ball Jugglers Convention 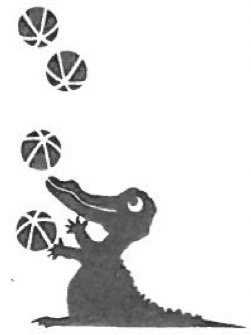 Click here (.pdf) to read the Table of Contents.

Four Ball Juggling is most readily available from the Advanced Book Exchange.